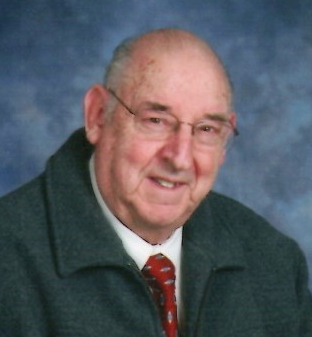 He was the youngest of six boys born on October 22, 1930 to Lena and Michael Franz. He graduated from Buchtel High School and Hower Trade School, and was a machinist by trade.

Al married Pauline (Polly) Alexander and moved to Wadsworth, Ohio where he lived until his death. He was a member of Sacred Heart Catholic Church for over 65 years. When Polly became ill, Al was her caregiver and took wonderful care of her until her death in 2007.

Al is a Korean War Era Veteran, having served in the Army stationed in Alaska. He worked at The Ohio Match in Wadsworth, Firestone in Akron and retired from B&W Construction in Copley, Ohio.

His son, Jack and his daughter-in-law, Susan of Westfield Center survive Al. He also leaves behind two grandchildren, Nathan (Rachel) Franz of Columbus, Ohio and Whitney (Kris) Wetmore of Hendersonville, NC. Nathan and Whitney were treasures to their Grandpa Al. Four of his greatest joys were his great-grandchildren, Lydia, Mary Grace, Jackson, and Benjamin.

Albert was able to celebrate the 100th birthday of his sister-in-law, Mary Franz earlier in July. He is also survived by many nieces and nephews whom he cherished.

In his final years, Al loved to go to Soprema Senior Center in Wadsworth where he made many friends throughout the years. We would like to thank all the “guys” who made his life fuller and the incredible staff who made his life a little richer.

The family would also like to thank the staff of Brookdale South in Medina and their Hospice team for the excellent care they provided Al during this last month.

A Mass of Christian Burial will be celebrated at 11 a.m. on Friday, August 6th at Sacred Heart Catholic Church, 260 Broad St., Wadsworth. The family will receive friends at the church one hour prior to the mass, 10 to 11 a.m. In lieu of flowers, memorials are suggested to the Soprema Senior Center, 617 School Dr, Wadsworth, OH 44281.