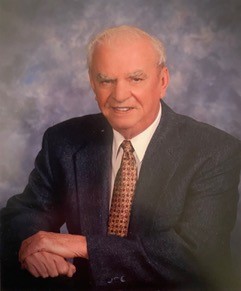 Mervin Dale Handshue (USMC) died peacefully on April 12 at Barberton Hospital. He was born on April 15, 1934 in Friendsville, Ohio (Westfield Township) to the late Paul and Dorothy (Acker) Handshue. The family moved to Wadsworth where Mervin graduated high school in 1953. During WWII, in the absence of his uncles who were serving, he worked on his grandfather’s farm on River Styx Road. There he learned to drive a team of horses before the age of 10 earning him the nickname “Horseman Handshue”.
Upon graduation, Merv enlisted in the Marine Corps and served from 1953 to 1956 earning the rank of Sergeant. On July 2, 1955 he married Marilyn Wingire and they shared a wonderful life together for 67 years. They began their married life in North Carolina where he was stationed, then moved back to Wadsworth after his discharge from the Marines.
After the Marines, he drove truck for many years, retiring in 1996. If you traveled the local highways, you might have heard “Triple Deuce” on the CB radio. In his spare time, Merv loved everything sports. During the fall, family conversations usually started and ended with a recap of the Cleveland Browns’ games. For over 40 years, he worked with the youth of Wadsworth, including his sons and grandson, coaching both baseball and football. As a young man, he was proud to wear the Marine uniform. In retirement, he was equally proud to wear the Honor Guard uniform with Legion Post 170 where he served for many years.
Mervin was preceded in death by sisters Donna Sprunger, Marcene Phillips and Grandson Matthew Handshue. He is survived by his wife Marilyn Handshue, sons Dan (Pam) Handshue, David (Carol) Handshue, Grandson Nate Handshue, Granddaughter Jessica Handshue, Great Granddaughter Emma Handshue, and numerous nieces and nephews.
Family graveside service was held at Jerusalem Church Cemetery. In lieu of flowers, the family suggests you make a donation to your favorite youth sports organization.