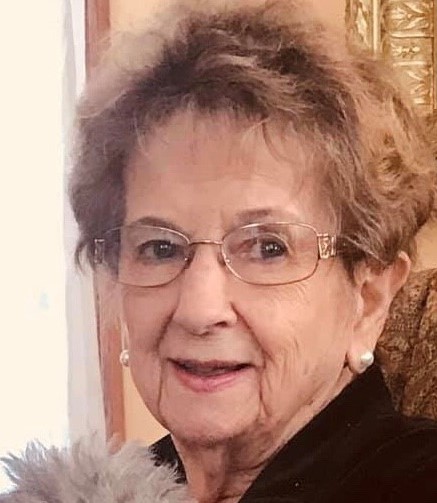 Mary Virginia (Ginny) Keyser , was born in Bellaire, Ohio on October 1, 1927. She was preceded in death by her husband Bill in 2000 and her daughter Kimberly in 2018. Ginny graduated from Bellaire High School in 1945 and she and Bill were classmates. After graduation, Ginny attended West Liberty State College but her Aunt lived in New York City and she had the opportunity to go there. She worked for the food chain Stouffers on 5th Ave and the highlight of her day was taking the days receipts to the bank with one of New York’s finest. After living in New York with 3 other girls, she opted to return home. By that time, Bill had returned from the Marine Corp and they resumed dating and eventually married and moved to Wadsworth.
Ginny and Bill became members of Wadsworth United Methodist Church in 1965 and Ginny became a member of the chancel choir.
By this time, Bill was working for the City of Wadsworth and Ginny was a secretary in the Wadsworth City Schools. There were 4 children born: Mark (Janice) Keyser, Kimberly (Bob) Cook, Stephanie (Steve) Watson and Denise (John) Kiel. Both Ginny and Bill kept busy traveling and volunteering. Ginny served 3 terms as WRH Auxiliary President, worked the gift shop for over 22 years, volunteered doing pew care, was a Circle Member, Rotary dinners, funeral lunches and was given the honor of WUMC Woman of the Year in 2009. Other volunteer duties at church were Chairperson for Caregivers and sang solos, as well as becoming active in their widows group. She was a member of the Wadsworth Community Choir until it became too difficult to manage getting up and down on the risers. Last but not least, Ginny helped put together books for the blind at the Lutheran Church in Fairlawn. Besides her children, Ginny leaves behind five grandchildren: Allison (Mark) Haymaker, Hillary (Derek) Newell), Thomas (Nicole) Watson, Jennifer (Joe) Frawley and Cole (Blair) Wilson Six great-grandchildren: Alex, Emma, Connor, Matthew, Sam and Briella Services are being held on Wednesday, May 1st at Wadsworth United Methodist Church. Services at 11:00 am with calling hours at 10:00 am.