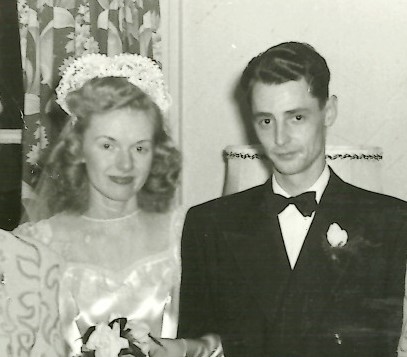 Phyllis F. Krabill passed on to the Lord on August 24, 2022. Born on January 31, 1925, Phyllis was, as many of her generation were, a “child of the Depression.” This fact and the frugality born of it informed much of the rest of her life.

Phyllis was born on a 100 acre farm on Fixler Road in Sharon Township. The farm had been cleared of its virgin timber by her great grandfather, Joseph Fixler. Consequently, Phyllis was a member of First Families of Medina County. Attending school in Sharon Center, she completed grades 1-11 there, graduating a year early in 1942 at the beginning of America’s entry into World War II. It was also in the summer of that same year that the family barn burned. While traumatic for Phyllis and her family, she fondly recalls that the barn was rebuilt in short order by neighbors who had a “barn raising” to help the family.

Upon graduation, Phyllis began her collegiate education at Mount Union College (now “University”). Given that most able-bodied men and many medical professionals were away during WW2, Phyllis worked at the Alliance Hospital switchboard for much of her college time. Phyllis also became a member of the Delta Delta Delta sorority. Given the shortages caused by the war effort, Phyllis recalls that you could have anything you wanted to eat, as long as it was “ram, lamb or mutton.” Because she was attending Mount Union year-round, she graduated a year early after summer semester in 1945, just as the war was ending.

Roger and Phyllis first met when she was five and he was seven years old while their parents were attending a bridge club party. According to Roger, Phyllis was a “red-headed brat”, and according to Phyllis, Roger was “a stuck up snob.” Those impressions lasted for a while, but not for long. They met again in 1942 when Roger was home on leave from military training in Nebraska, and that began their romance. After the war, Roger graduated from Purdue University after summer semester in 1946 and the couple was married later that same year in December 1946. Phyllis was already working for the Veterans’ Administration, ultimately completing five years there before starting a family.

Phyllis and Roger had two children, Jeff in 1951 and Jane in 1954. She remained at home raising the children, but continued to work. One of the first to work at home, Phyllis transcribed surgery dictation from Wadsworth Hospital and then worked for Dun & Bradstreet. She also became a substitute teacher during these child-rearing years.

Phyllis and Roger owned three homes, but had only one mortgage. True to their Depression Era experiences, they worked and saved until they had enough cash to buy each of their first two homes (Lyman Street and Gordon Avenue). Their third home where Phyllis lived out her years is on Woodland Avenue which they bought in 1965. She went to work full time in order to pay off that home as quickly as possible, teaching primarily 5th grade for the Norton City Schools from 1965 – 1989 when she retired.

Phyllis and Roger enjoyed many things, but perhaps none as much as dancing. As she would say, “If music was playing, the Krabill’s were on the floor.” Later, Phyllis engaged her interest in history by becoming a member of the Medina County Genealogy Society, the Sharon Township Historical Society and the Wadsworth Area Historical Society, being named a Life Membership of the latter two. She was also a member of the James Fowler Chapter of the DAR (Daughters of the American Revolution), an interest that she turned into a passion for charting out the origins of her family.

Attributing her love of dogs to her childhood best friend, a white collie, she was a lifelong dog lover. She also enjoyed the Wadsworth Community Band, and assisting with worship services at three local nursing homes for many years. After Roger’s passing in 1990, Phyllis became an avid practitioner of both Yoga and Tai Chi.

Phyllis was preceded in death by her husband of 45 years, M. Roger Krabill. Also preceding her in death were her father and mother, Blake and Lenore Fixler, as well as two uncles, Neath and Louis Wilson and their spouses, Marguerite and Marjorie. More recently in 2021 her daughter-in-law, Lauralee S. Krabill, also predeceased her.

The family would like to thank Bianca Sterling whose kind and determined care allowed Phyllis to remain in her home until the time of her passing. They would also like to thank Phyllis’ neighbors and many friends whose undying friendship and devotion made her later years a true blessing.

Friends and family will be received on Sunday, August 28, from 12:30 to 1:30 p.m. at Hilliard-Rospert Funeral Home, 174 N. Lyman St. in Wadsworth, where a Memorial service will follow at 1:30 p.m.. with Pastor Barbara Bartholomew officiating. Inurnment will take place in Woodlawn Cemetery.