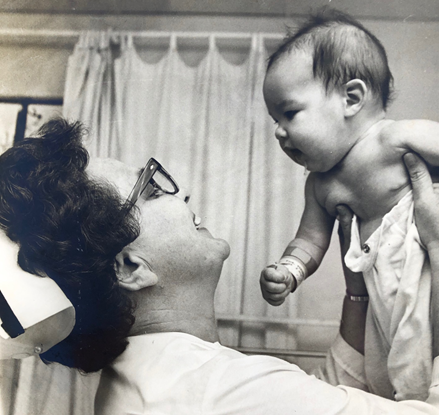 Barbara Kriston RN, age 98, died peacefully on November 17, 2020, at the Inn at CoalRidge Memory Care Unit in Wadsworth, Ohio. She was a longtime member of St. Louis Roman Catholic Church and faithfully received the holy sacraments. She had a special devotion to the Virgin Mary asking her in prayer to intercede for each and every member of her extended family.
Barbara was born in Barberton, Ohio on January 2, 1922. She was predeceased by her parents, Stephen and Elizabeth, and by her 9 siblings: Betty Gerbetz, Margaret Larko, Bertha, Stephen, Joe, John, Mike, and Catherine Ozbolt. Her brother, Charlie, died in infancy. Catherine, 94, her youngest sister, died just 22 hours before her, also in Wadsworth. Barbara leaves behind numerous nieces and nephews who love their Aunt Barb and will always treasure her memory.
Barbara’s life was one of service. After graduating Barberton High School, Barbara entered the WAACs in 1943 and served overseas during WWII. Upon returning to the States, she earned her Nursing Degree from Akron City Hospital in 1949 and in 1950 she began a long and distinguished career as a pediatric nurse at Variety Children’s Hospital in Miami, FL (currently Nicklaus Children’s Hospital), just two weeks after it opened and eventually was appointed the 2nd shift Supervisor of Nursing. In 1956, Barbara also earned a Bachelor of Science Degree in Psychology from the University of Miami. She served as a First Lieutenant in the Army Reserves during this time and was called to Active Duty at Ft. Polk, LA in 1961-2 during the Cuban Missile Crisis. She then returned to her nursing career at Variety Children’s Hospital until her retirement.
Barbara’s greatest joy was in helping others and she demonstrated her passion for nursing by caring for thousands of children and their families over the years.
Barbara loved Miami and her house in Pinecrest, FL, which she shared with her lifelong friend and fellow nurse, June Adams also from Ohio. She enjoyed her pool and yard, especially her mango trees, and her dogs, Hypo and Shuzie. Barbara truly loved and enjoyed people, especially her family, her neighbors, her Nurses’ group, and all those she encountered while serving as an election poll worker.
The seriousness of her professional life belies Barbara’s most memorable characteristic: her sense of humor. If Barbara wasn’t telling you a joke or a funny story, then she was giving you a cartoon or printed joke along with a jar of mango jam. It is impossible to remember Barb without smiling. We feel positive that St. Peter has already appointed her Supervisor of the heavenly joke tellers!
With Barbara’s earthly service now over, she is undoubtedly enjoying a well-earned celebratory glass of wine with all of her loved ones in heaven.
We want to acknowledge and thank the nurses, aides and staff at The Inn at CoalRidge and The Hospice of Western Reserve for their loving and gentle care for Barb especially during these trying times of visiting restrictions. Every staff member cared for her as if she was part of their own family.
The funeral and Mass of Christian Burial will be celebrated Thursday, December 3, 2020 at 10:00 am at St. Augustine’s Church, 204 6th St NW, Barberton, Ohio, with interment at the Ohio Western Reserve National Cemetery, 10175 Rawiga Rd, Seville, Ohio. Please observe masking and social distancing protocols as you enter the church.
If you wish, tell a joke in Barbara’s memory, or send a donation to Nicklaus Children’s Hospital, 3100 SW 62nd Avenue, Miami, FL 33155 (https://give.nicklauschildrens.org).