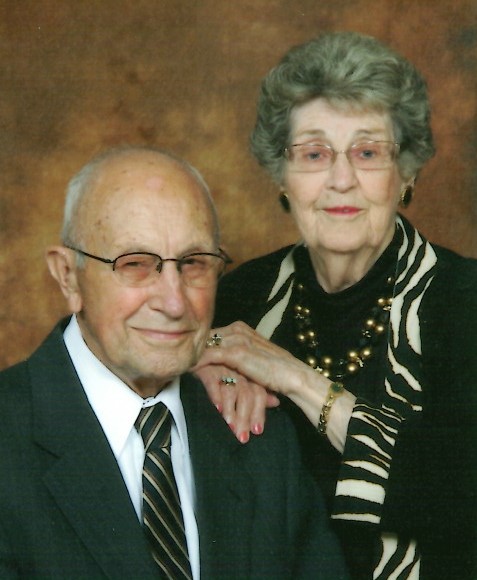 Born Faero Irene Freymuth on August 28, 1919, she was the oldest daughter of George & Ruth Freymuth of Cridersville, OH. She went to school in Cridersville, graduated in 1937, worked as a secretary and met a farmboy… Everett F. Linker and they were married on August 22, 1945.

She was a farmer’s wife, but they worked as a team, worked many hours, but always together! Corn, beans, wheat, dairy cows, pigs, & chickens, they did it all. They had one daughter, Janet (Kelly) Johnson, who lives in Wadsworth, OH.

They sold the farm in 1992 and moved to  Wapakoneta. Both the same age, they adapted to “City” life very easily. Gaggy fell and broke her hip in 2014 and this resulted in a move to Wadsworth. They were only 95! After Wapakoneta Manor and the Inn at CoalRidge, they finally ended up at Altercare of Wadsworth, where they both received excellent wonderful care and made good and lasting friendships. A special thanks to Melissa, Susan, Dawn, Stephanie and all.

Faero was preceded in death by her husband, Everett, her parents the Freymuths, brothers Neil  & Norville Freymuth and sister and brother-in-law Jean and Charles Sutton.

The family will receive friends 5-7pm Wednesday at the Hilliard-Rospert Funeral Home, 174 N. Lyman St., Wadsworth and 11-1pm Friday at the Bayliff & Eley Funeral Home, 1102 Lincoln Ave., Wapakoneta, OH where a funeral service will be held at 1pm with Pastor Becky Sunday officiating. Interment will be in Greenlawn Cemetery, Wapakoneta.

Memorial donations may be made to St. Paul United Church of Christ, Wapakoneta.

Faero – Mother, Mom, Grandmother, Grammy but best of all Gaggy.

We Love You ! & will dearly miss your German Chocolate Cake, YUM!