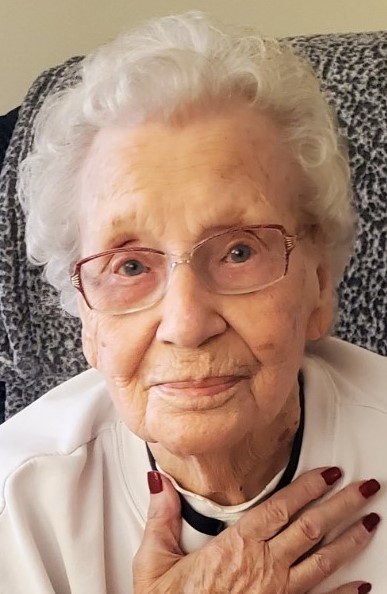 Helen Sophie (nee Jordahl) Ott, 94, of Wadsworth, died on January 7, 2023, at the Apostolic Christian Home in Rittman, Ohio.
Mom was born in Warroad, Minnesota on June 7, 1928 to the late Odin and Matilda Jordahl. Her mother passed away when she was very young and due to circumstances out of her control she lived with different families throughout her young life. In her late teens and early 20’s she worked as a cashier at a drug store and a waitress. It was during the time she was a waitress that she met a young man working on a sewer project in the area. His name was Jacob “Jake” Ott. They started dating and the rest is history. They married on October 28, 1950 then moved to Ohio in 1959 and bought their first and only home in Wadsworth, Ohio in 1962.
Dad worked in road construction and was gone quite a bit in the early years. Mom raised 4 children. This was not an easy task. She maintained her home like a well-oiled machine; baking the best bread, making the most amazing food and taking care of everything else in between. She helped her children with whatever we needed even as we got older. She loved her family beyond measure.
Somehow with all the demands on her life she was able to find a few things she enjoyed. She and our Dad would go out dancing on Friday and Saturday nights. They did some traveling. She enjoyed playing cards with family and friends. She was able to join a bowling league which she enjoyed for many years. She enjoyed painting ceramics and collecting cookbooks. After our Dad passed away in December of 2003, she did get a chance to take some fun trips with her children and a few bus trips with friends.
Mom is survived by her children: Jacob (Linda) Ott of Tennessee, Bruce (Kelly) Ott of Wadsworth, Brian (Sue) Ott of Florida and Brenda (Robert) Fisher of Doylestown; six grandchildren: Steve, Logan, Todd, Nathan, Whitney and Donald “DJ” and three great grandchildren: Rebecca, Brian and Layla. She is also survived by step grandchildren Becky Suboticki and Jill (Steve) Turner and their children Madison and Max plus many nieces and nephews living in Minnesota. Mom was preceded in death by her husband Jacob M. Ott, parents Odin and Matilda Jordahl, two brothers: Ole and Oliver Jordahl and many brother and sister in-laws.

The family would like to thank all those who cared for Mom in her later years; the Apostolic Christian Home, Ohio’s Hospice LifeCare, The Inn at Coalridge and Liberty Residence 1. In lieu of flowers, the family suggests contributions be made to Ohio’s Hospice LifeCare, 1900 Akron Road, Wooster, Ohio 44691 or a Memorial Contribution to the Apostolic Christian Home, Inc., 10680 Steiner Road, Rittman, Ohio 44270.
The family will receive friends 1-2pm on Friday January 13, 2023 at the Hilliard-Rospert Funeral Home, 174 N Lyman St, Wadsworth, OH 44281, where a funeral service will follow at 2pm. Interment at Woodlawn Cemetery.