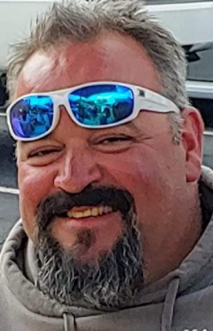 Jesse James Perkins Sr., 44, of Wadsworth passed away unexpectedly on Friday, August 28, 2020. Jesse was born on January 25, 1976 in Barberton, OH and was a life long Resident of Wadsworth, OH.
He was preceded in death by his father Terry Perkins, uncles Gary Flinn, Larry Flinn and James Flinn and aunt Cathy Johnson.

Jesse was employed by Trade Winds Construction as the General Manager and Field Supervisor. He was a master drywaller and perfected his trade and was a welder also. Jesse worked hard and played hard. He enjoyed afternoons on his Harley Davidson, was an avid hunter and Browns fan.

The family will receive friends 3-6pm Monday, September 7, 2020 at Pine View Acres, 11991 Orville Rd., Massillon, OH 44647 where a funeral service will follow at 6pm.
In lieu of flowers memorial donations may be made to the family. Envelopes will be available at the service.