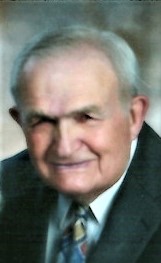 Watt W. Seawell Jr., born on Jun 4, 1926 passed away peacefully with his family surrounding him June 22, 2020. Watt is survived by his wife Donna, his five children: Glenn, Torrance, California; Bruce (Debbie) Macedonia, Ohio; Cynthia (Tom Horsfall), Streetsboro, Ohio, Larry (Debbie) Findlay, Ohio; Karen (Eric G Johnson), Jamestown, NY; as well as 10 grand-children, and 14 great grand-children.
Watt Washington Seawell Jr. was the son of Watt W Seawell and Sarah F (Smith) Seawell from Gloucester, Virginia. He graduated from Achilles High School in Achilles, VA in 1943 and shortly thereafter was drafted into the U.S. Navy in October 1943. He served in WWII with his final assignment concluding in the Navy Finance Center in Cleveland, Ohio in 1947.
In Cleveland, Watt met Donna J. Fram and after a three-month courtship, they were married on April 26, 1947. This April, they celebrated their 73rd anniversary. Watt attended Western Reserve University in Cleveland, Ohio. He was then recalled to active duty in the U.S. Navy in October 1950 and served at the Naval Air Station in Almeda, California during Korean War until his January 30, 1952 discharge.
Donna and Watt returned to Northeast Ohio and settled down and started a family. Watt pursued a life-long profession in the then emerging field of Data Processing/Computer Sciences. He pioneered many new applications and introduced computers to businesses and industry. While he worked for several smaller companies, introducing the concepts of computer technology, he also worked for large companies, including GMC and the University of Akron. He retired from the Defense, Finance, and Accounting Services department of the Navy Finance Center in Cleveland, Ohio in 1993. His influence spanned Finance, Education, Manufacturing, Retail, and Government industries. He was also active in several professional organizations including the Data Processing Management Association and served as one of their International Directors for many years and holds a professional certification in computing.
Watt and Donna lived 33 years in Macedonia and spent most of their retirement in Wadsworth, Ohio where Watt enjoyed gardening and occasional trips to Chesapeake Bay, VA to return to his hometown and deep-sea fishing. In his retirement years, Watt was involved with volunteering for multiple organizations and helped to organize and build a church, the Chapel, in Wadsworth, Ohio and later became active in the Pleasant Hill Baptist Church.
In lieu of flowers memorial donations may be made to: