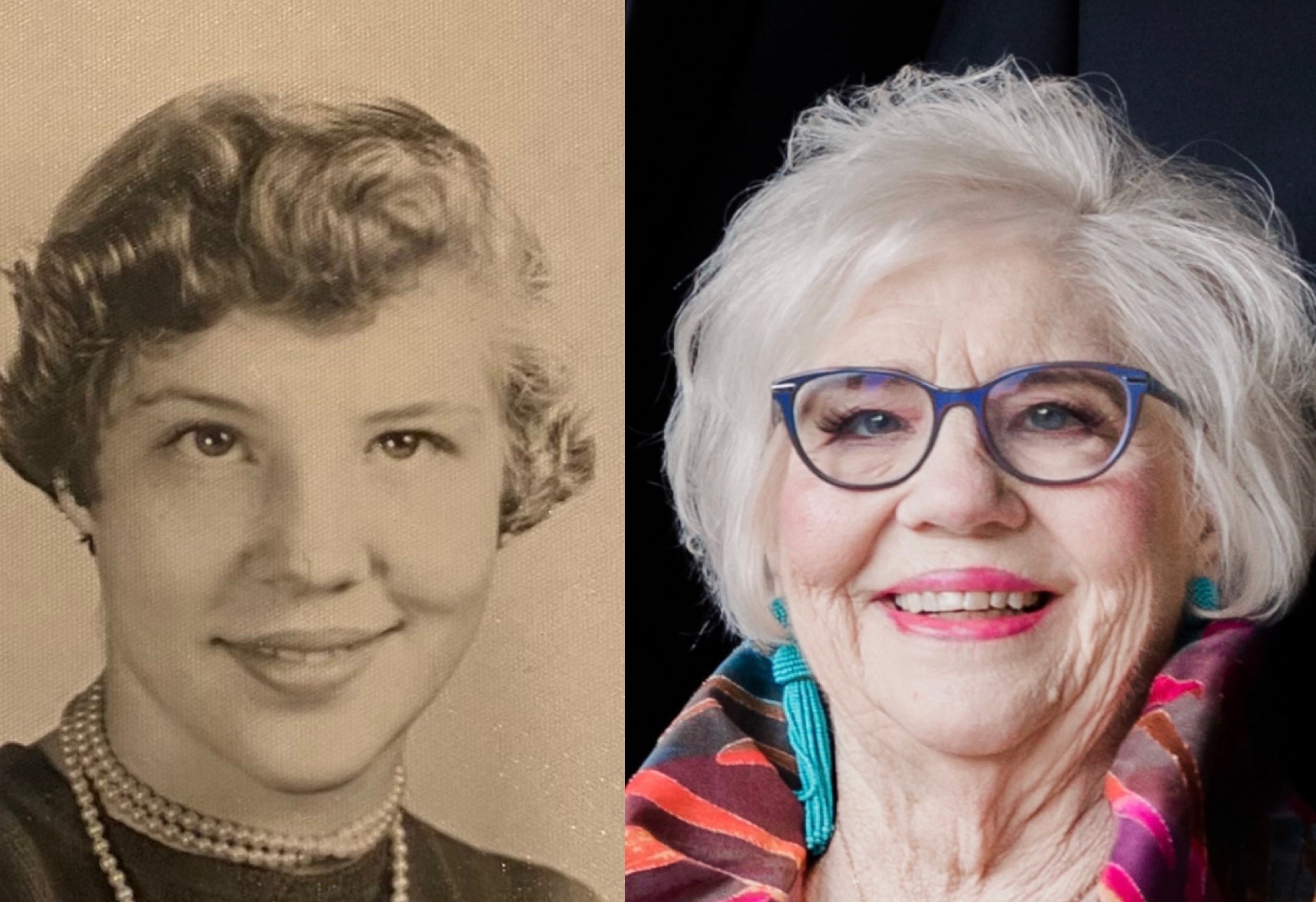 Carol Lee (Cusack) Simmons passed away peacefully on October 25, 2021, at the age of 83, surrounded by family.

Carol was born on June 25, 1938, in her beloved hometown of New Martinsville, West Virginia. She was raised by her grandparents, Dora Jane (Watson) and Lee Cusack, as well as her Aunt Day and Aunt Teenie (Daisy and Justine Cusack), both elementary schoolteachers. It was her relationship with her aunts that sparked her lifelong passion and commitment to family, education and community.

Carol loved to share tales of growing up in a small town along the Ohio River, where she knew everyone and everyone knew her. Whether she was tooting the train whistle with Uncle John, conductor for the B&O railroad, helping out at the hotel with Uncle Charlie and Aunt Bessie, or having nose-numbing fun with her girlfriends, her youth in New Martinsville left her with no shortage of stories to tell.

She graduated from Magnolia High School in 1956, where she was voted Most Likely to Succeed and served as President of the National Thespian Society.

Not long after graduation, while working as a lab technician at the PPG Research Center in Natrium, WV, she met Robert Simmons, a chemist. They attended a company dance together, and as they say, “opposites attract.” Carol, the social butterfly, and Bob, the studious soon-to-be PhD, were married on June 1, 1963. They welcomed two girls, Jane Lee & Stephanie Sue, before moving to Norton, Ohio, in 1971, where their youngest daughter, Cary Ellen was born.

In Norton, Carol and Bob led full lives on Cherrywood Drive. They created lasting friendships and enjoyed raising their children together, who were loved beyond measure. Carol was a community advocate, holding seats both on the Board of Zoning Appeals and the Board of Education. She enjoyed supporting Norton Music Boosters and chaperoning the Norton Panther Marching Band band camps and trips. After a brief stint living outside of Pittsburgh, Pennsylvania, Carol and Bob moved back to Ohio and settled in Wadsworth, where they have lived for the last 21 years.

During her time as a grandmother, self-proclaimed “Grandma Funny” played a very special part in the lives of her grandchildren. She was always “there” in whatever capacity was needed. She earned the title “Great Grandma Funny” this August, as her first great-grandchild, Maeve Justine, was born.

Carol will be remembered by those who loved her as their biggest cheerleader. She never knew a stranger, and was someone deeply interested in people. Her ability to connect with others and recall the many facets of their lives in great detail did not go unnoticed. She had an uncanny ability to lighten the mood in any room with her generous spirit, style and grace. It goes without saying that Carol’s stories will live on through her friends and family, with much love and laughter.

Her family would like to extend a special thank you to: Trix, Vinnie, Geri, Dr. Liza Talampas, and the staff of the Justin T. Rogers Hospice Center.

There will be a private celebration of life honoring Carol (complete with Christmas music, per her wishes!). Hilliard-Rospert Funeral Home will be handling all arrangements. In lieu of flowers, donations may be made to the Norton Music Boosters (PO Box 1335, Norton, OH 44203) or Weathervane Playhouse (1301 Weathervane Lane Akron, OH 44313) for the benefit of children in the performing arts.