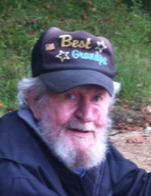 Austin Sloan, 81 of Hamlin, passed away at home Friday, April 29, 2022. Austin was born July 24, 1940 to the late Luther and Lockie (Cook) Sloan. He was one of 12 children, which has made the annual Sloan Reunion an event we all looked forward to.
Austin was a 1958 graduate of Guyan Valley High School. He retired as a Welder and Mechanic from the West Virginia Dept of Highways. When he was younger, he was also a welder for the US Boiler Makers, and on many occasions worked with his brothers, Randy, Luther and James. They always had so many stories to tell about their jobs and their after hours entertainment.
Austin loved the outdoors, whether he was hunting, fishing, looking for ginseng or just walking in the woods. He was a proud life time member of the NRA.
He was preceded in death by his 1st wife, Eva Mae (Cook), the true love of his life, and Dixie (Weaver), the other love of his life. Brothers, Henry, James and Randy Sloan, Sisters: Thelma Lucas, Martha Hereford, Manna Colegrove, Avis McCellan and Sarah Bell Lucas. Step grandson, Shane Wahl and his dear sister-in-law Rena Adkins.
Austin is survived by daughter, Eva Belinda (Dan) Rospert and son, Austin Phillip Sloan, grandchildren; Dr. Daniel S. Rospert and Thomas J. Rospert, Brothers, John (Kay) and Luther Jr. (Wanda) Sloan and sister Frances Ann (Ron) Bowers, stepchildren, Tahna Lilly, Shawn Wahl, Shelly Pietrowski, and Dierdra Tabor and step grandchildren, Brooke Cassie, Ryleigh, Trey,Tyler, Zachary, Jacob, Ali and Luke, three step great-grandchildren, Tehyen, Abby and Landon, there are five step great-great grandchildren. Many nephews and nieces.
In lieu of flowers, family requests that you honor Austin by making a memorial contribution to your local Youth Hunting organization or the Buckeye Chippewa Outdoors Youth Shooting Club, P. O. Box 61, Doylestown, Ohio 44230.

The family will receive friends from 10-11am Saturday May 7, 2022 at the Koontz Funeral Home, Hamlin, WV, where funeral service will be held at 11am. Burial will be at the Slone Monroe Cemetery.