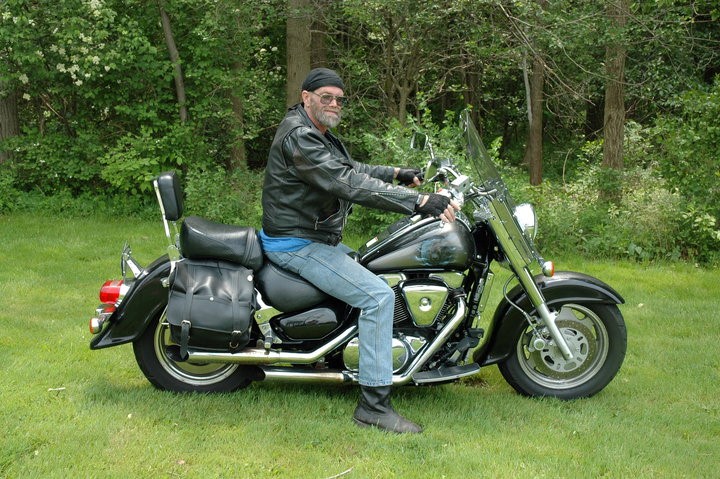 Kendell Thomas.(That guy who walks those dogs).Passed away on November 3 at his home. Born in Kokomo Indiana. He raised his family in Wadsworth.
A fixture on Main Street for many years. He volunteered over the years as a Boy Scout leader and Playground monitor at the old Franklin School. He touched the lives of many kids. Who will remember him and many games of Keep Away with the cowboy hat he wore for years.
He enjoyed his family, His motorcycle, His animals,medieval reenactments, and bonfires, He worked hard at several jobs. Over the years. Most recently at Akro Mills Wadsworth. He is survived by his wife Pam Thomas, His Sons. Jeremy Thomas and Joshua Thomas of Wadsworth. His daughter Amy Jo Tygart(Tom) of Kokomo Indiana and Grandaughters Stephanie Lusko and Josie Tygart. He is also survived by his Father, Melvin Thomas of Kokomo (Mary Ellen). Surviving brothers Kerry Thomas(Kathy) of Deltona Fla. Kory Thomas of Peru Indiana. Hank Beard (Mary) of Wooster Ohio and Kevin Beard(Mary Jo) also of Wooster. And a very special Aunt and Uncle Ray and Alice Gurske.Brainard Minnesota. He was preceded in death by his mother. Marilyn Beegle and his brother Kelly Thomas. He had many friends both two and four legged. Many nieces and nephews.
He enjoyed the outdoors. The Wadsworth Hunt Club. Target shooting. He was an avid reader. There will be no service. Remember him fondly. Take a walk. Pet a dog. Skritch a cat. Enjoy your moments. Make a memory. In lieu of flowers the family request you make a donation in his honor to your local animal shelter