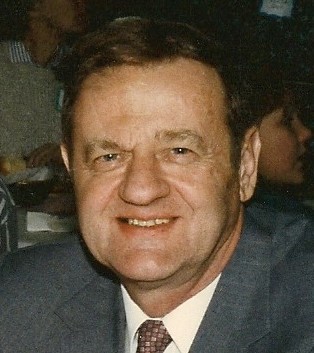 Virgil Dale Mochel (91) went home to be with the Lord on 7/15/2022. He is survived by his loving wife of almost 71 years, Marian, his three children Steve (Laurie), Jane, Carol (Walter), his eight grandchildren, six great-grandchildren, and many nieces and nephews.
Preceded in death by parents Clem & Amelia (Shalliol) Mochel, sister & brother-in-law Mary Jane & Lester Berger, brothers Evans & Robert (killed in World War II), brother Richard, brother Ned, and son-in-law Bill.
Virgil was born on a farm in Woodland Indiana. He grew up in the same community as Marian, and they were married on 8/26/1951.
He graduated from Madison Township High School, received his BS and MS from Purdue University and his PhD in chemistry from the University of Illinois.
He served in the army during the Korean War and was stationed at the Army Chemical Center in Maryland.
Virgil worked at Corning Glass Works and retired from Firestone Tire & Rubber Company in Akron where he worked as a research chemist.
He and Marian have lived in Wadsworth since 1965 and have been very active serving in the United Methodist Church, the FISH organization and their community as a whole.
Spare time was spent tending to his small farm where he had a large garden, an apple orchard and also raised beef cows. He enjoyed making homemade apple butter and sharing the experience with his friends and family.
Virg and Marian’s joy was making memories for their children which included traveling to many states and countries. They also had the job of creating memories with their grandchildren by picking apples and vegetables, climbing trees, going on truck rides, playing Run From Grandpa, and building a (still standing) club house.
God gifted Virgil with a kind heart, creativity, humor and a love of music. He sang in the choir, entertained people with his beloved tuba, and always liked to make people laugh. He wrote and directed 20 Christmas plays. He created humorous skits for various church functions, including the annual Sweetheart dinners. But one of his favorite achievements was being part of a quartet group called the Harmony Grits which entertained not only church festivities but many organizations in the community.
Virg was also a talented author. His first book was called Clem and Meelie, which told the interesting history of his family and life on the farm. He later published his autobiography, Virgil’s Story, and four illustrated children’s books: Buster and the Bull, A Friendly King, Ginger and the Roosters, and Buster’s Path.
Virgil was very thankful and gave glory to God for all the blessings, family and good friends he’s had along life’s journey.
A celebration of life will be held at the Wadsworth United Methodist Church on Saturday 7/23/2022. Calling hours will be held from 10:30-11:30. The service will begin at 11:30. Address is 195 Broad St, Wadsworth OH 44281.
Contributions may be given to the Wadsworth United Methodist Church or the Wadsworth FISH organization (150 College St, Wadsworth OH 44281).
Hilliard-Rospert
(330-334-1501)
www.HilliardRospert.com