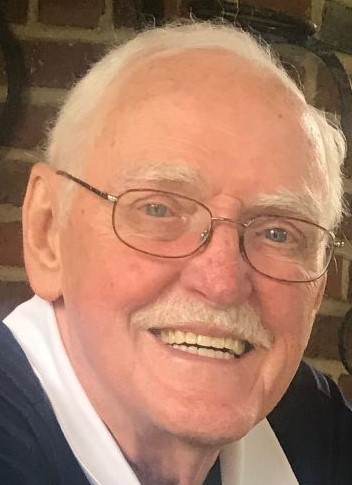 Richard A. Walter (Dick), 87, passed away December 12, 2020. He was born June 28, 1933, in Lowell, Ohio to Nellie (Davis) and Alfred Walter. His family moved to Zanesville, Ohio, where he grew up and graduated from Bishop Rosecrans Catholic High School in 1951, where he was a state ranked basketball player. The school had no identifying team name and at his suggestion they were named “The Rosecran Bishops.” The name continues today.

He graduated from Ohio University in 1956 with a degree in Electrical Engineering. After college he entered the US Air Force as a Strategic Air Command (SAC) Navigator. While in the AF he played semi-pro baseball in Harlington, TX.

He was employed his entire career at Goodyear Aerospace/Loral/Lockeed Martin with over 50 years of service. After retirement, his favorite pastimes were golfing, working in his wood shop, spending time with his grandchildren, playing cards with friends and watching Cleveland sports teams.

Predeceased by his wife Mary (Sudi) Walter in 2012, they enjoyed 53 years of marriage. Having met and married in Arkansas, they moved to Akron and established their home in Springfield Township. He was also predeceased by brother James and sister Mary Gatewood.

A service will be held at the Ohio Western Reserve National Cemetery in Rittman, Ohio, at a later date.