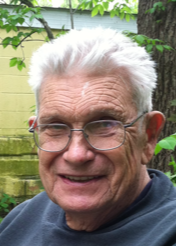 Douglas Wiseman, 94, of River Styx, passed away peacefully at home on March 30, 2020. Born and raised in Akron, at 17 his father gave him permission to enlist in the U.S. Navy in 1943 to fight in WWII. He proudly served as an F4U Corsair fighter plane mechanic at a landing strip in the Pacific Islands, including Henderson Field on Guadalcanal, for two years. After leaving the Navy, Douglas enjoyed his job as an electrician at BF Goodrich until he retired at age 63. During his retirement he became active in the Wadsworth VFW Post 1089, Medina County Council, American Legion, and Eagles, and served in various positions for the next 20 years including Commander, Chaplain, and Adjutant. He was also deeply honored to serve in the Honor Guard until his early 80’s. In 1951 he bought his homestead in River Styx which was his joy throughout his life. He never tired of mowing, splitting wood, and enjoying the solitude of his little piece of the world. He loved to read and enjoyed chatting with his neighbors, and had many interesting stories to tell. His family and friends share their sadness at the loss of this honest and decent man who lived a long and productive life with the highest integrity. He was preceded in death by his parents, John and Mattie, his sisters Dorothy, Dovie, Dora, and Dolores, his brother McDonald, and his son Ronald. He is survived by his brother Donovan and sister-in-law Peggy, his daughters Debora and Sharon, and son-in-law Jim Riemenschneider, and his son Mark, and grandsons Luke and Zachary in Michigan. Due to the pandemic, memorial services will be held at Hilliard-Rospert Funeral Home in Wadsworth at a future date in March 2021